Start was with a member if the public, a lady from Venezuela.
Second part was with Mr Simon Nyanhi respected ZHRO elder and human rights activist.
at June 29, 2019 No comments:

Its  a support system, it’s networking, it’s a family and it’s a safe haven for many.

Many people join and instantly you form bonds, friendships and suchlike. There are people there to lift morale, not just on Wednesday at Vigil, but now on our social media platforms, which we are reaching many people.

People who didn’t know there was this support and people with the same goal, freedom. I personally have made friends, got advice and even given some advice as well, believe or not. We all support each other on pending cases, on new cases and just to be strong as we fight the good fight for freedom for all Zimbabweans - home and away.

We get together, we pray, we sing, play drums and tell people about our cause. So many support us and sign petitions with us.  If one of us is in need, we stand together, if to make a phone call, write letters or just be there to give moral support and just an ear to listen to.

We have organisers and leaders who support us, encourage us not to lose heart of the goal, be it fund raising, “Walk for Freedom”, and there is even a taste of home at the Vigil.  Toasted peanuts (nzungu), maputi and we recently had a ‘bring-and-share’ of home cooked food.

There was a lot of Zimbabwean relish that some last had years back, it was well prepared and well organised it felt like a family.  Sometimes people organise to go for a meal - Nando’s being the favourite & familiar, but most important that the support is always there .
at June 27, 2019 No comments:

Emmerson Mnangagwa came with promises, with the excitement of a new leader after the success of his coup to oust former President of Zimbabwe, Robert Mugabe.

He knew the Zanu PF type of rulership was dictatorial, and abusive and stood against true democracy and he thought people would welcome him better if he changed those ways. But he has returned to the old Zanu PF within months of getting power.

He promised freedom of speech and said people are free to speak out but now he is investing in weapons to bash people in case they exercise their right to demonstrate.

Intimidation is back and worse than the previous Zanu PF administration. People in Zimbabwe are suffering and scared at the same time under the rule of ED as they call him.  The few that speak out are involved in strange accidents and people are afraid.


These are the Zanu PF ways and unless this party is removed from power, there is little hope for Zimbabweans.

The theme of this weeks ZHRO Vigil is World Refugee Week.

The ZHRO Embassy Vigil on the 19th of June 2019 at 429 the strand outside of the Zimababwe embassy started on a rather clammy day.  The small talk before the protest started was filled with despair for those who are in Zimbabwe and the Current Voodoo economic's being used by ZANU PF to arrive at an inflation rate of nearly 100% within 3 years of the appointment of Mtuli Ncube.

Setting up was commenced and completed quickly.  Before the protest started those gathered praised God with some Shona hymns.  Then a prayer was said by one of the respected elders in ZHRO Mai Molly Ngavaimbe (ZHRO Member and MDC supporter).  In her prayer she prayed for the improvement of the lives of those in and from the impoverished nation of Zimbabwe.  She prayed for the true independence of the people of Zimbabwe from ZANU PF and its proxies.  She ended the prayer by putting all that was to be done during the protest in Gods hands.  More praise and worship followed.

It was during the last Praise and Worship that some of the unofficially defined roles and strengths of the ZHRO team were in full flow.  At the front, handing out flyers meeting and greeting the public was Bigboy Sibanda.  On the drums was Ebson Chigwedere.  Photographs were being taken by Philip Mahlahla and this time leading the singing was Mary Muteyerwa who brought some new energy to the proceedings.

Early on in the protest there was an unwelcome guest who was ushered away by the City of Westminster London security services on patrol that day.  One of the documents was defaced by the unwelcome inebriated man.

After the protest, Sarah Bayisayi said that the ZHRO monthly meetings will resume, starting on the 6th of July 2019 at the Assembly rooms just after the MDC meeting.  She also said that the annual meeting for ZHRO will now take place over 3 days instead of just one day as previously planned.  The pencilling in of a Friday Saturday and Sunday during the month of October in Swindon was advised.  There will also be executive and other nominations during the meeting.

Adding to what was said by Sarah Bayisayi, Rashiwe Bayisayi said some of the yardsticks to be used for the nomination and election of future executive leaders for ZHRO are, attendance of Vigil, attendance of events, participation when in attendance and other activities that promote ZHRO and its members.  "Those who are up front will be nominated, don't sit at home come once and say, I want that role," said Rashiwe Bayisayi. 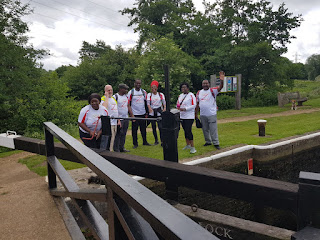 The next announcements made by Sarah Bayisayi were concerning the fundraising for ZHRO and photographs taken then uploaded by Philip Mahlahla onto flicker.  All were urged to send all photos as early as possible to allow the photos to be uploaded expeditiously onto flicker.

The 12th of June 2019 Vigil started whilst the weather was rather, confused.  All were wondering whether or not it was going to rain.  Small talk was exchanged, then setting up was commenced.  The small talk was filled with empathy for the untimely and unfortunate loss of life in Zimbabwe.  A prayer was said before the commencement of the Vigil.  It was only earlier in the week, that we were all shocked, when it was

announced in our forums that sadly, Honourable Vimbai Java Zimbabwean Member of Parliament, eldest daughter of the late Dr Morgan Tsvangirai, had sadly passed away (source MDC Publicity and various media outlets).
Reports in Zimbabwe focused publications such as Bulawayo 24, Harare 24, The Standard, Zimeye, News day, Pindula, and others mentioned that soldiers had been involved in the accident.  Those of Zimbabwean origin and those who follow Zimbabwean affairs know what the obvious concerns are.  It has been reported in The Standard that Honourable Vimbai Java’s campaign manager and organising secretary for her constituency, Paul Rukanda, and Tafadzwa Mundwa, her late mother’s cousin, died after they were trapped in the wreckage for over an hour

There were rumors at the time that Apostle Chiwenga had been involved in an accident.  The sources were rather poor, during the protest on the 12th of June 2019, however a video that has been posted on Zimeye’s Facebook page and on Youtube channels 263 chat and Stewart Nyamayaro, which apparently has Apostle Chiwenga in his Hospital Bed, seems to confirm the reports that indeed, he too has unfortunately been involved in an accident with what he seems to suggest is not just another accident.  Again, those from Zimbabwe and those who follow Zimbabwean affairs closely will understand what this means.  Unfortunately, with regret, the media reports are that his wife and others who were in the car with him passed away.

At the end of the weekly protest, a meeting was called which was attended by all those present on the day.  During the meeting Alfred Mukuvare ZHRO former Vice Chair, spoke and it was suggested that we resume the monthly meetings that we used to have on the first Weekend of every month.  It was suggested that the next meeting should be in July with the venue date and time to be announced soon.  It was around the beginning of the meeting that Thabo Makuyana arrived.  He apologized to all for his tardiness.

Increased Participation in the vigil was praised by the leadership present.  Notification was also made of the 100 km Walk which was to take place, including the practice sessions that commenced this past Sunday the 16th of June 2019.  Starting at Guildford Rail Station at 11:30am.  Rashiwe Bayisayi mentioned that the intention was to walk 21.16 miles or 34 km from Guildford to Hampton Court Rail Station as practice for the 100 KM walk later in the year.  “You need to practice, practice practice”, said Rashiwe Bayisayi.  Alfred Mukuvare said “Its quite a good thing to be on the walk, 1) You enjoy the friendship, the fellowship, and 2) all the jokes which are told whilst on  the walk, 3) its exciting to see the country side.”  It was also mentioned that there is a Facebook page for the ZHRO walk with more information including the ability to share the experiences of the walk.  Those present were also reminded that later in the year ZHRO is going to have a national meeting where a new Leadership team will be voted in and members would need to attend to cast their votes. 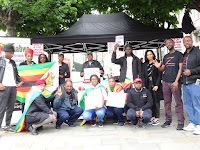 Honourable Tendai Biti was attending his book launch alongside co authors former Nigerian President Olusegun Obasanjo and Dr Greg Mills, Director of, The Brenthurst Foundation.  They discussed among other things human rights and politics with civic society leaders from around the world in a closed private event.  The book is called Democracy Works.

Other invited attendees from ZHRO  were John Burke, Sarah Bayisayi, Ebson Chigwedere and Tinashe Aliseni.  Whilst the event was in full flow, MDC members and ZHRO activists made sure their voices were heard all over St James' Square from the beginning of the event at 11am, until well after 1400hrs when the event ended and the authors walked out to greet all outside.

Shortly after the event an alleged ZANU PF apologist and apparent Intellectual was asked for his thoughts by Thabo Makuyana, in regards to a statement by Vladimir Putin, the current President of the Russian Federation in which he said, "Africans believe in others more than themselves!"  The basic reply was I don't know, however the long reply was filled with seemingly inebriated exuberant verbosity by the apparent intellectual who tried to dodge the question.

Further direct and pointy questions were asked by among others Vuka Vuka Zimbabwe, which infuriated the man.  The man ended up swearing at Vuka Vuka, who returned the favour in a gentlemanly manner.  The man then put his hands on Vuka Vuka.  Vuka responded and told the man not to touch Vuka, then shortly after this the man scuttled away back into Chatham House.  This was clear evidence that he was not used to being asked pointed and direct questions, that require straight answers.

Shortly after this, former President Obasanjo and Honourable Biti came out to cheers and applause from all attending.  They signed their books, took photos and everyone left the successful event with high hopes for Zimbabwe and Africa.