ac·tiv·ism  (ăk′tə-vĭz′əm)
noun.
The use of direct, often confrontational action, such as a demonstration or strike, in opposition to or support of a cause.

Lest we forget what activism is about, a couple of dictionary definitions of ACTIVISM.

For those in Zimbabwe few are happy with the state of affairs in the economy, or for any form of opposition to the dictates on an illegal "Government" [ a Zanu PF regime masquerading as a Government when they are in fact a military junta, whose sole purpose is to remain in power so they can continue to loot every facet of the wealth of Zimbabwe].

For those who have been forced to flee Zimbabwe, activism is one method to secure change. For those in Zimbabwe Activism can be a death sentence - those who tread this path do so very carefully.

The illegal Government of Zimbabwe has recently appointed a failed Finance Minister to head a Cyber Security, Threat Detection, and Mitigation Ministry.

Law expert, Alex Magaisa, said this week that “But more ominously creating a standalone Ministry to monitor cyberspace also shows Mugabe's penchant for expanding instruments of coercion as opposed to protection of fundamental freedoms. Chinamasa's new role should send alarm bells ringing in both civil society and the opposition. The hand of state repression is only getting stronger and Chinamasa will try to justify the relevance of his new role..”


“People have been making jokes about this ministry but I see serious threat to freedom of expression, access to information and the right to privacy,” said Chris Musodza, an ICT expert based in Harare. “We now have a ministry dedicated to surveillance and monitoring of the cyberspace.”

Clearly the 'state apparatus' will do its utmost to stamp out opposition, or the means of communication - which will subvert their own domination of 'traditional' media channels.

This should be the state of affairs for all Governments, but alas most will fail this test, and those like Zimbabwe are working from the other end of this scale [of natural justice]. So for a band of Zimbabweans to walk into their own embassy to challenge the the evil regime and its state apparatus IS activism, it is a symbolic act. - To change perception, to challenge a nation so cowed by a dictator, that the removal of his portrait from the wall of the Embassy is actually seen as treason - ironically and most telling, tragically the same dictator responsible [but as yet unpunished] for the genocide known as Gukurahundi, but also torture, rape, abductions, murder to the present day.

The Zanu PF junta rules Zimbabwe, with an iron fist in an iron glove, and with iron Jack Boots. Their position as a purported "democratically elected Government" [sic] has to be challenged, not just by Zimbabweans, but by the rest of the World. Zanu PF are a criminal cabal, with much more in common with a terrorist organisation than the rest of the World should tolerate. 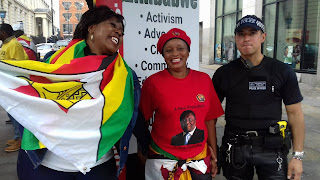 27th September 2017 a group of around 20 Zimbabweans "visited" their own Embassy to protest at the injustices within Zimbabwe.
All 20 were thrown out, quite illegally

Jah Prayzah won’t be getting my Vote

Until he says "Zanu PF must Go", Jah Prayzah won’t be getting my vote In the last 24 hours I have seen loads of people tweeting ab...