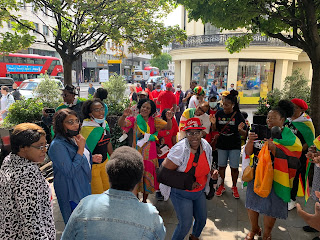 Legal Challenge to Stop Mass Deportations by the Home Office

It has come to our attention that since the week commencing 5th July 2021, the UK Home Office "Enforcement Unit" has been detaining large numbers of Zimbabweans for the purpose of deporting [for those with a criminal conviction] or forcibly removing [those within the asylum system] on [expensive] chartered flights the first of which departed on Wednesday 21st July 2021. Those being "targeted" are mainly those without leave to remain and / or have no 'live' leave-to-remain applications filed with the Home Office. The Home Office are claiming that most are "hardened criminals" - but this is a gross distortion of the facts - simply pandering to bigotry.

It is our considered view that many of the deportees face imminent danger if they are forcibly returned to Zimbabwe.

The first flight left Stansted Airport at 11:30 pm on Wednesday the 21st July 2021 with merely 14 deportees on-board an Airbus A380. Many potential forced-removals being removed from the flight due to Legal interventions appertaining to individual cases. Those that did go, were not "activists"

The problem we have with the Home Office is that this "TARGET DRIVEN" policy is indiscriminate and fails to offer any real protection for those who have fled Zimbabwe due to persecution from the ruling Zanu PF Party.

We are in need of funding a 'class action' [or such-like] against the Home Office policy in the High Court [or Higher], to prevent such discriminatory actions upon the Zimbabwean diaspora. Cases are not being assessed on merit, and the Asylum Process itself is too convoluted, complex and expensive for those who have fled persecution.

The same 'heavy-handed' approach is being applied to other Nationalities such as the Jamaicans, Vietnamese amongst others. However we are focussing on the Zimbabwean diaspora only.

In Zimbabwe Corruption is institutionalised

Tendai Biti [opposition Vice President] had described the IMF as “a naïve and dishonest institution” after it published a report forecasting a 7% growth in Zimbabwe’s economy.

Zimbabwe has been robbed of US$24.6 billion of public funds between 2015 and 2019, former finance minister Tendai Biti said. He also said that Zimbabwe is also losing US$3.6 billion through Gold and Cigarette smuggling annually.

Between 2009 and 2014, US$15 billion worth of diamonds were plundered. The total figure of US$43.2 billion of looted public funds and plundered natural resources is enough to run Zimbabwe hospitals for 900 years.

Zimbabwe on the Ground – a very dangerous Place

In their petition, the rights groups raise a red flag over a “disturbing trend in Zimbabwe of weaponising the criminal justice system”.

They also accuse Mnangagwa’s administration, which came into power in November 2017 following a military coup that removed strongman Robert Mugabe from office, of abusing the courts to punish dissenting individuals who are mostly opposition politicians, activists, and journalists.

Citizens in Action Southern Africa (CAISA) is deeply concerned about the deteriorating state of human rights in parts of the region in recent weeks. Of special concern are the situations prevailing in Republic of South Africa, Mozambique, Zimbabwe and Eswatini. These four countries are facing three unique situations which however have a common thread of human rights violations passing through them.

CAISA is also worried about the closure of operating space for civil society in Zimbabwe where authorities are making illegal demands regarding the operations of NGOs and civil society organisations. We call on the Government of Zimbabwe to respect and uphold Constitutionally guaranteed rights to assembly and freedom of expression which form the bedrock of civil society work.

The US Embassy in Zimbabwe had this to say

“Despite incremental improvements from past elections, domestic and international observers noted serious concerns and called for further reforms necessary to meet regional and international standards for democratic elections. Numerous factors contributed to a flawed overall election process, including: the Zimbabwe Election Commission’s lack of independence; heavily biased state media favoring the ruling party; voter intimidation; unconstitutional influence of tribal leaders; disenfranchisement of alien and diaspora voters; failure to provide a preliminary voters roll in electronic format; politicization of food aid; security services’ excessive use of force; and lack of precision and transparency around the release of election results.”

“Significant human rights issues included: unlawful or arbitrary killings of civilians by security forces; torture and arbitrary detention by security forces; cases of cruel, inhuman, or degrading treatment or punishment; harsh and life-threatening prison conditions; political prisoners or detainees; arbitrary or unlawful interference with privacy; serious problems with the independence of the judiciary; serious government restrictions on free expression, press, and the internet, including violence, threats of violence, or unjustified arrests or prosecutions against journalists, censorship, site blocking, and the existence of criminal libel laws; substantial interference with the rights of peaceful assembly and freedom of association; restrictions on freedom of movement; restrictions on political participation; widespread acts of corruption; lack of investigation of and accountability for violence against women; crimes involving violence or threats of violence targeting women and girls, and the existence of laws criminalizing consensual same-sex sexual conduct between adults, although not enforced.”

“The authorities used COVID-19 regulations to justify severe restrictions on the rights to freedom of expression and peaceful assembly. They deployed security forces to abduct, assault and torture perceived critics, and opposition members and leaders. Police and security agents killed at least 10 people. Women were denied access to essential maternal health care, and violence against women and girls was widespread.”

“A joint team comprised of agents of the police, military, the Central Intelligence Organisation, and the Office of the President, known as the “Ferret Team”, terrorized government critics, opposition leaders and activists, and their family members. Many, including several members of the main opposition party, Movement for Democratic Change-Alliance (MDC-A), were abducted from police custody, tortured and dumped far from their homes.”

MDC-A (Movement for Democratic Change Alliance) Main Zimbabwe opposition Party with structures based in the UK.