The  planned weekly Vigil protest started with everyone wondering why, on this day, there were so many security officers and black vehicles parked outside the Zimbabwe Embassy, at, 429, The Strand, London, compared to the usual just one or two unmanned cars.  (The security officers outside were mostly IC1 males, who obliged with smiles and greetings when approached) this is a personal note. “Moyo and Mangwana might be in, someone yelled out.”  “Oh, they are early,” shouted another.  “We’ll have to make as much noise as possible then.  We need to make sure they can hear us,” another continued.  Rashiwe and Sarah Bayisayi were amongst the first to arrive at 11:15am. 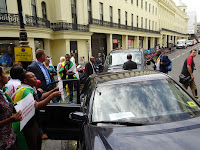 The protest against the ZANU PF regimes lack of respect for human rights and those in the Embassy visiting then started.  Passers-by seemed more eager than usual to sign the petitions on the desk.  The noise levels seemed to be enticing them more and more (passers by).  One of the first to sign the petitions was a middle aged IC3 Lady from Zimbabwe, who was, informally dressed and surprisingly, she seemed not to know much about what was happening in Zimbabwe.  All she did was ask questions which even the tourists did not ask.  Others included a couple from Switzerland, a couple from the USA and another from the UK, just to list a few. 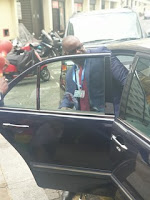 The delegation that had the black cars and security personnel then all of a sudden appeared wilst the protest was underway, the routine of the security personnel seemed well rehearsed and ran like clockwork.  They made a somewhat, clear barrier between the delegation and the protesters.  They were firm but polite.  The delegation were then in their cars and left after the protesters were clear of the front of the vehicles.
The noise levels were deafening as the protesters made themselves heard whilst singing, Mnangagwa Ngaende, (Mnangagwa must go) ZANU PF Ngaiende, (ZANU PF must go).  All the while the delegation were in their cars and the majority UK security personnel conducted the operation of getting the delegation into their respective vehicles swiftly, then waited for the protesters to clear and then they (the delegation) were off to other engagements.
The protest continued and ended with a group photo.
Those who attended the protest as per the register were,
Mary Muteyerwa, Rashiwe Bayisayi, Sarah Bayisayi, Kingstone Jambawo, Ebson Chigwedere, Charity Ndebele, Sibongile Bvungidzire, Lindsey Zaranyika, Tapiwa Muskwe, Nancy Makurira, Florence Marowa, Tinashe Aliseni, Loice Gomera, Salom Nkiweane, Vimbai Gomera, Alfred Mukuvare, Thabo Makuyana, Panashe Muyeye, Stella Mandiranga, Plaxidia Mugonde, Molly Ngavaimbe, Chegika Lifa Phiri, Chipo Parirenyatwa, Lucia D Mungwani, Nehemia Musonza.  Camera man today was Philip Mahlahla.
By ZHRO Team 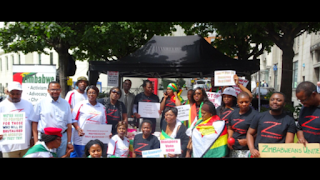