Pain Of The Silenced Zimbabweans...

An animation that speaks a million words shows of the ghost of Robert Mugabe staring at Emmerson Mnangagwa who is clutching a police baton smeared with the blood of the innocent and has a speech bubble that reads, “ ...you’re doing wonders for my image Emmerson!” 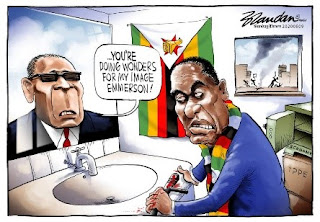 The painful image with its equally sorrowful meaning paints a very desolate future for the country of Zimbabwe as it already stares down the barrel of a pandemic that it is ill equipped to rout. It takes a feat of sheer nefarious brutality and maliciousness for one soul to outdo the diabolical acts of one of the world’s renowned dictators.

As a believer of the afterlife, I can imagine a grandiose banqueting table made from the crushed skulls and mutilated bones of virtuous humans, set in the deepest pits of hell and the souls of Mussolini, Hitler, Mugabe ,Idi Amin and all their fellow comrades in arms preparing to welcome Mnangagwa at the very top of the table after displacing the devil himself.

Each day and at every turn sets a new precedence for Mnangagwa and his posse to transcend themselves in the heinousness that knows no bounds. Burning tears trickle down the now familiar path of hollow and ashen cheeks of Zimbabwean citizens that have done nothing but speak out about their abused basic human rights. There is a clear and discernible fetish that the Zanu-PF party has for young women who demonstrate for their rights and wellbeing. The most indisputable pictures of the MDC Trio; Netsai Marova, Cecilia Chimbiri and Joanna Mamombe’s traumatised faces and ripped clothes covered in human excrement after they were found dumped on the road side after being abducted and tortured  for almost 48 hours, are a gruesome testimony of the complete lack of humanity that the Mnangagwa administration has established. The three young women were beaten, raped by guns in their rectal passage, forced to drink each other’s urine and left to deal with crippling post traumatic stress disorder.

As if their unthinkable ordeal was not enough, they are constantly being reminded of their trauma by being subjected to court cases in hospital, imprisonment and being blamed for faking their own abductions. The junta’s barbarism does not discriminate on gender as evidenced by the abductions of Davison Chamisa, Tawanda Muchehiwa only to name a few, who were abducted and brutalised by state agents using the same modus operandi as the MDC Trio and others. “Crimes” such as undermining the power of the president, demonstrating or inciting violence because one was wearing a face mask bearing the hashtag Zanu-PF must go are among those alleged for the victims that have chosen to speak out for themselves and those that cannot do so for themselves.

Investigative and award winning freelance journalist Hopewell Chin’ono and politician Jacob Ngarivhume are among the many journalists, lawyers, doctors and nurses who have been recently incarcerated in the confines of grim and sorrowful cells of prison for “inciting the public to commit violence” and calling for protests against the less than minimal wages, poor and dilapidated facilities and gross negligence of basic human rights. The unchanging allegations have become an undying tune on the lips of arresting agents on anyone who is brave enough to recognise and stand up against the government that cares only about their own wellbeing and their perpetually looting pockets. A whole country is living in constant fear with no realisation if they will see themselves past a few days in their future. A country so corrupt that it has set social media ablaze with the hashtag #ZimbabweanLivesMatter in the midst of a life changing pandemic.

Zimbabweans and fellow sympathisers from different organisations worldwide are taking their cries to Zimbabwean embassies in their own Country’s; of human rights refuge, hoping that one day they will be heard, their lives are spared and they do not die by the hands of Mnangagwa pawns. All the impoverished and silenced citizens wait in the hope of international intervention wishing that the images that are inundating all media platforms will speak of the truth that the junta is trying to conceal. Opposition is still imminent in the forms of those “enforcing the law” in the incident of the police firing rubber bullets at the Zimbabwe Lives Matter and Not In My Name protestors in Pretoria who were speaking out for the lives and futures that are being destroyed by the tyrannical administration that is Zanu-PF.

How many more heart-breaking images of women, children and the elderly being beaten and killed for wanting basic rights, do they need their eyes to behold for them to stand with the people rather than fire at the people? How much more blood needs to be shed before a country can be completely free? A Zimbabwean flag without the red and yellow stripes representative of blood shed in liberation and the citizens not enjoying the looted riches is the clearest illustration of the plight of the country which is no longer free! The people need change and freedom!