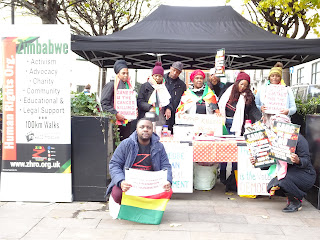 On examination of a small but big topic from Scotland, which started way back in the 18th Century, one has to be in awe of, "The Division of Labour."  What is ZANU PF good at?

Adam Smith, who is known as the Grandfather of Economics, coined this term, "The Division of Labour."  This term is still true today.  If you look at car plants, car washes, well oiled political parties, protest movements, huge car dealerships, most manufacturers, the oil and gas sectors and the Labour market its self.  This term is in use all the time, sometimes knowingly and other times, unknowingly.

The division of Labour is the splitting of tasks by workers or by management to try and achieve greater, "mass production" by specialisation. This was used by Henry Ford, in the first mass production of vehicles in the USA and is still in use today by Ford, but in an extremely sophisticated and gigantic way.

There is the ZHRO Leadership, Marketing team, flyers team, drummers, banners team and those that look after the table when we are at the Vigil, researchers, etc.  Even in the different teams, there are further specialisations.  Some specialize on Facebook, others Twitter, or on Blogs, and others such as Tapiwa Muskwe who has been the keeper of the main ZHRO banner and placards  when the Bayaisayi sisters were off.

One person alone trying to do everything that is done in the name of ZHRO, for ZHRO is literally impossible.  It would take too long and wouldn't be as good.

I would thus like to thank all ZHRO members and the ZHRO leadership for being better than those in the 18th Century, by putting this simple term into practice.  You are experts in, "The Division of Labour."

They (ZANU PF) seem to be the best at harassing, torturing, raping, kidnapping, summery executing, killing, looting and impoverishing Zimbabwe.  So, maybe ZANU PF does use the "Division of Labour" for something.