The Right to Protest

The Right to Public Mass Protest

Was shown not to exist in Zimbabwe by the perceived actions of the staff at the Zimbabwe Embassy.  During setting up, there was a visit from the Metropolitan police.  There were three officers.  The initial conversation started out with the officer asking the expected questions.  He almost seemed to know who to go to.  Mr Philip Malhahla, was quick to answer, “We are here usually from around 11:00 am until around 01:00 pm,”he said in a calm manner.

“We are peaceful people,” he continued.  “We are here all the time,” shouted one of the ZHRO members.  “I know!” the officer replied, as the conversation continued.  The officers left by going back to their car which was parked near Raymans, along the Strand.  It was rather unusual but not surprising as the ZHRO Wednesday Weekly Vigil protest has been going for some years now and has not been visited by police at the start in this way for some time.
On this day quite a number of folks had arrived by 11:30am and setting up had already been commenced.  Folk inside the embassy could be seen looking at the protest and gesticulating towards those protesting.  “They must have called the police,” one of the protesters said.

“We are not going anywhere,” Chipochedenga Parirenyatwa exclaimed.  “Apa ndepedu apa (This is now our space and time),” she continued.  The current right to protest in Zimbabwe is being met with threats by among others Victor Matemadanda who on the 28th of July 2019 is quoted to have said, “We will send Soldiers who are trained to kill.”  This has resulted in the MDC President Nelson Chamisa being reluctant to call the masses out to protest in fear for the likely massive loss of life, yet it is a basic human right the world over to protest. 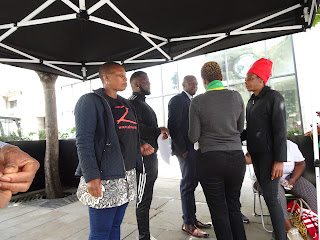 Shortly after the Police left, a middle aged man came from within the Zimbabwean Embassy and said he was from a company that is trying to build hospitals in Zimbabwe.  He said the Zimbabwe government would pay deposits first, then the UK companies would go to Zimbabwe and start the building of the hospitals with their own money.  He seemed keen to insist that no Government officials would be getting their hands on the money.  Government Ministers can simply get the contracts for the supply of Labour, Machinery, Materials or Financial Products then hey Presto, like magic, what he has said is thrown out with the bath water.

He also seemed keen to point out that the Zimbabwe Government would be paying for the Hospitals in instalments, which obviously means foreign currency.  Most of the remittances of foreign currency to Zimbabwe, are from the Diaspora and not from Exports.  The keenness of the Zimbabwe Embassy to stop the Wednesday Vigil protest then became as clear as day.  They (The Zimbabwe Embassy) were actually meeting with the UK companies to try and strike the deals during the ZHRO Protests and ZHRO Protesting could potentially affect the outcome of their deals, as ZHRO know how to make noise.

“I am actually shocked that you have not poured water on me,” said the middle-aged man.  This statement was greeted with laughter by the ZHRO team he was talking to.  He then subtly tried to push the government line that Zimbabwe was actually better off, now without the $USD as main tender than with the $USD.  He followed on saying that the main fault for the current crises in Zimbabwe lies with the Mugabe regime and that Mnangagwa was actually trying to fix things.  This is despite the fact that Mnangagwa was in Government for almost all of the time that Mugabe was in power. 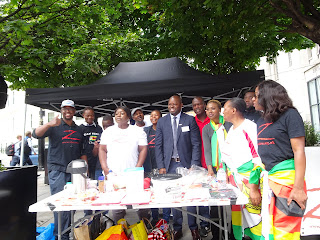 Rushiwe Bayisayi, then responded to this by saying, “even if you are not in Government, then you do well.  At the end of the day, it is Government that will come in and say, Oh, look at what we have done.  Isn’t this good?”  He had no answer for this.

He then praised the currency changes and likened what is happening now in Zimbabwe to what happens in the UK. “ One needs to take money to the bank or bureau de change” he said with a smile.  “If the money can not be changed here (in the UK), it is B*&@ S^*$, its is proper B*&@ S^*$,” Chipo Parirenyatwa exclaimed.  “The day it can be changed here (in the UK), I will say it is good.  Till then sorry.”  The other challenge is that the Zimbabwe dollar was removed using Parliament voting and Law makers actually voted on this issue.  The reinstatement of the Zimbabwe Dollar would thus most likely have needed to be reinstated through the Parliamentary voting system.  This may be seen as a lack of due process on the part of the Government.  This is going by the explanation given by the former Finance Minister Tendai Biti.

The next topic was regarding the alleged corruption charges against a female ZANU PF Member of parliament.  (Her name has been left out to avoid prejudicing the case as it is live in court.) Its all a smoke screen some said.  “IT’S FAKE,” Rashiwe Bayisayi pointed out.  “Her bags were being carried for her,” Sarah Bayisayi added.”  “She could be going home every day,” Sarah Bayisayi continued.  “Apparently Ginimbe used to have Chicken Inn (deep fried chicken take away) every day,” she continued.  “One is allowed to have their relatives deliver food to them,” he responded, “so….”

“The axe of the law needs to fall on everyone in an equal measure,” stressed Rashiwe Bayisayi.  “Wiwa was in mahand crafs (Hand calfs), yet she (name withheld) was walking like a free person and she had her bags and food being carried for her.”  This was in reference to a statement by Themba Mliswa in parliament where he said, Ziyambi Ziyambi must erect a VIP section for Kleptocrats.  This statement was said on the 30th of July 2019.

When he was shown pictures of ZANU PF stone bakeries, the man looked on in shock.  “Zimbabwe is going backwards,” Sarah said.  “Ava varikurwara (These ones are ill)” Chipo added.  “It looks like a stone bread oven he said in shock.”  “IT ACTUALLY IS A STONE OVEN,” another ZHRO member shouted.  “How can you as children accept to be run by ancestral spirits (ne Mudzimu), whilst you are so young?”  Chipo Parirenyatwa asked.  “Those old ones never want to leave,” Chipo Parirenyatwa said in a calm voice.  The stone baked ovens are reportedly to be used for the commercial baking of bread for the masses.  There is a picture of a stone bakery within the grounds of ZANU PF Headquaters.  The reason the Government is pushing the idea of the stone bakeries, is that there are up to 18 hour power outages in some parts of Zimbabwe, thus making it difficult for companies (such as large scale bakeries) that rely on a steady supply of electricity to operate. 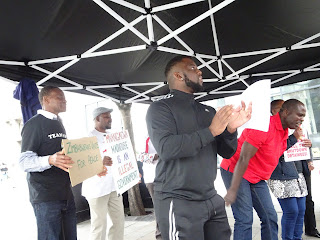 Chipochedenga Parirenyatwa then thanked the man for coming out to have a chat.  “As you can see your jacket is clean and dry.  There is no water.  If those ones in there come out, we will spray them,” she joked, whilst pointing at the Embassy.

The Vigil then got on and started with a Prayer as usual.  Announcements that were made included that for the 110km Walk for freedom that is going to start early in on Saturday the 10th of July in Brighton. 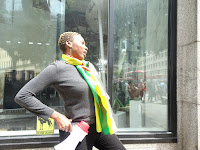 Later on, towards what was meant to be the end of the Vigil protest, a council employee accompanied by his colleagues came and asked about the Vigil.  The conversation was similar to that had with the Police.  The council employee left within 5 minutes and this made those attending the Vigil increase their volume and stay for much longer at the Vigil than was initially intended.

Some people who looked like they were from the companies that had been talked about earlier were later seen leaving the Zimbabwean Embassy, whilst folk in the Embassy continued looking on and gesticulating at the vigil.  This then acted as a prompt for the end of the Vigil.

Thank you to all who attended the Vigil.