Defiant in the face of a Tyran

Whilst protesting outside the Zimbabwe Embassy in London on Wednesday 8th of May 2019, ZHRO members took to the busy, cold, wet and windy streets to continue standing up against the tyrannical regime of ZANU PF. 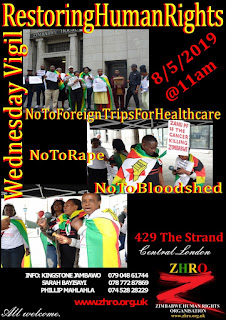 Wielding signs such as, "ZIMBABWE'S OPEN FOR KILLING AND ABDUCTIONS," "ZANU PF IS THE CANCER KILLING ZIMBABWE," "SHUT DOWN ZANU PF THEY HAVE LOOTED ZIMBABWE'S ECONOMY," just to list a few, they braved the elements and likely violent repercussions to them and their families  for daring to stand up against an evil regime in Zimbabwe.

Some of their documents got soaked by the rain and tea when, due to a gust of wind that blew with such force, it caused the tent to lift and a fellow protester to stagger into the table thus spilling their cup of hot tea all over the table and some of the documents.  The table was then forced into the rain.

There was some dismay by some, as these documents are used by the leadership on a weekly basis.  "It adds to the authenticity of the documents, exclaimed Thabo Makuyana.

Chipochendenga Parirenyatwa one of the ZHRO leaders spoke some time later and advised that there will soon be leadership elections and a recruitment drive.  Discussions will determine the venue, place and time, which will be announced in due course.

With the mid day temperature this Wednesday 15th May 2019 expected to be around 19 Celsius, with light winds and partly cloudy, a better turnout is expected.